Star Essence is a company dedicated to creating impeccable vibrational essences. This includes using sacred activated water, exquisite quality flowers and gemstones, intention and attention. Star Essences are made during powerful planetary activations and alignments in energetically powerful places. They address healing as well as evolution, with an ultimate goal of PEACE, within ourselves and on our planet. They are made with love! www.staressence.com

Love Fest! Making the Dolphin Essence: The Story of DolFUN ~ Being Love

“As you dissolve into love, your ego fades. You’re not thinking about loving; you’re just being love, radiating like the sun.”
-Ram Dass

It felt like the day was made for me.  I woke up early, filled with excitement, and that happy-for-no-reason feeling.  I knew there was the possibility of making the dolphin essence.  I had had it in my heart to make it for over 15 years, waiting for the right moment... I knew it had to be in the Santa Barbara channel, and I didn't know much else- except it would have to feel right, and be graceful.

Maureen Bell, who is an inter-species communicator- in particular with whales and dolphins- and Art Cisneros, a Chumash elder, invited me and a group of other conscious folks for a cetacean-communing cruise on the Condor Express, a wonderful local whale watching charter.  They organized the journey knowing that when we commune with these beings, we are changed- our vibration is raised and our hearts are opened and our DNA is rewoven.  Also, we had an intention of transmuting some of the toxins in the ocean- and the food the dolphins and whales were eating.  I'm not sure how successful we were with that.  The message Maureen received from the whales was simply to receive their gift.

We were supposed to meet at the marina at 7:30am.  The bucket I thought I would use had disappeared, and so did the rope, so I had to find a store open early.  I found the perfect turquoise bucket (turquoise seemed very dolphin-y) - and no rope.  Oh well, it's a boat!   They're bound to have some rope.  (Of course, I am reminded, in the nautical world you're supposed to call it line, not rope.)  Otherwise we were going to be tying shoelaces together if it really wanted to happen.

As we were getting on board I spoke with Eric, one of the crew, telling him what I wanted to do: I wanted to make a dolphin essence, with the dolphin water.  He thought that was pretty cool, and figured he could come up with some line (rope).  He spoke to the captain, and the captain said it was okay to do, as long as Eric did it with me.  His big concern was that he wanted to make sure we didn't drop that bucket into the ocean.  I like that.  The Condor Express crew were very conscious, letting us know that there are no parts on the boat that can harm the critters... no sharp things, everything is safe.  And as far as tracking the whales- they only do it with photographs.  No tagging or anything.  That was all really good to hear, and you could feel how much they loved their jobs.  They seemed to get as excited as us to see the fabulous creatures.

Maureen is amazing in her conviction.  She never had a moment of doubt that the dolphins would show up, because she had specifically made an appointment with them. She assured me we would see many of them, and indeed, there were two of them greeting us as we left the mouth of the harbor- to welcome us. 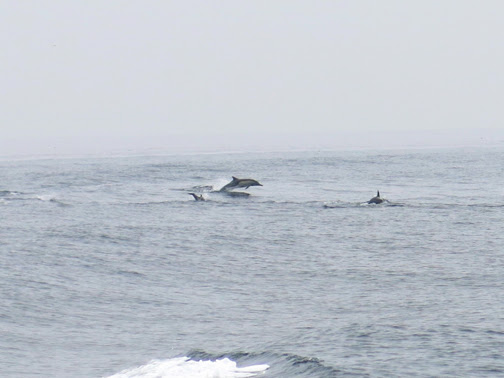 First we saw the sea lions, and then we started seeing more and more dolphins. They just kept showing up, and "surfing" with our boat.  At one point I started to get the bucket, and Eric showed up and said we would come to an even better place, and they would slow the boat way down.   A little later, Eric, on his own, showed up with the bucket.  He was quite happy to be a part of this event.  We made the essence.  It was so easy.  Eric even got a funnel so we could put it into the clean glass bottle I brought.  I anointed the folk on the boat with some of the mother essence.  Oh what FUN. 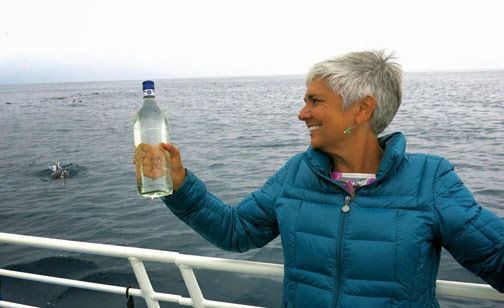 And- that brings me to the people who showed up.  Oh My!  Around 40 or 50 people who crisscrossed many different circles that I am in.   I knew nearly everyone, and met a few new folks, and everyone was excited, and from the minute we saw the first dolphin, in the first 2 minutes of our journey, hearts opened and opened and continued to open.  We would all squeal with excitement every time we saw something wonderful- Minkey whales, over 1000 dolphins, dolphins mating, mother and baby whale, spouting whales, whale tails- all that extracted great joy from all of us.  We were, for sure, a happy group.  We toned and sang to the whales and dolphins.  Art sang them songs.  It was the perfect atmosphere to make the essence.  It was the best most amazing heart fest and field of love.

O What a Happy Day!

The dolphin essence is called "DolFUN ~ Being Love" and addresses unconditional love, unity consciousness, lightheartedness and play. It can also be helpful for clearing and healing the earth's waters, and like all of the essences, has myriad other gifts.